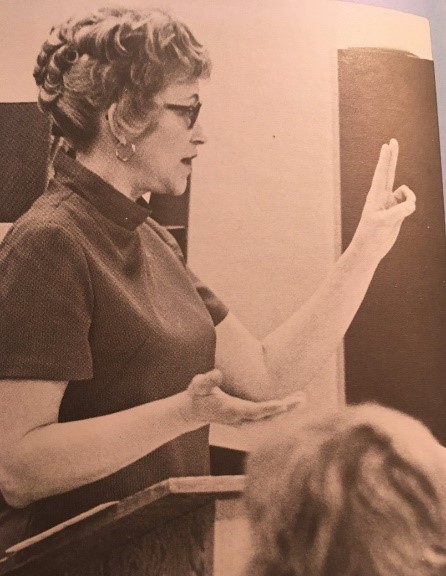 The scholarship will be awarded annually to 1 BHS senior student interested in teaching and/or journalism and plans to continue their education.  Preference will be given to students who plan to attend a post-secondary school in the field of English and/or journalism.

Ardys was highly devoted to her students and BHS. For many years, she was the faculty advisor for the BHS student newspaper, the Hi-Herald, and a number of her students won high school journalism awards, winning trips to Chicago, Illinois; New York City, New York; and Washington, D.C. She also served as Chair of the BHS English Department. During the summers of her teaching years, she took courses at Colorado State College, Concordia College, and the University of North Dakota (UND), as well as the University of Missouri on a Fellowship from the Newspaper Fund of New York. She also earned professional credits from UND, Bismarck State College (then Bismarck Junior College), and North Dakota State University.  She married Carl Munson, Jr. of Bismarck, North Dakota, in 1955, and they had one son, Mark; they were divorced in 1958. Carl, Jr. and his four siblings and Carl’s mother all graduated from BHS.

Ardys was an avid reader, reading several thousand books in her lifetime, including more than 950 books in retirement. Her former students would appreciate the fact that she kept detailed lists of these books, and critiques of them. She was an enthusiastic fan of Shakespeare and Edgar Allan Poe. Ardys also enjoyed bowling, golfing, boating, fishing, knitting, crocheting, making her own clothes—and, most of all, family reunions and traveling.

Clarice Nassif Ransom is the author of children’s book Tripod Kitty and the Recipe for Kindness which helps teach kids to show kindness and accept differences in others. Ms. Ardys, the teacher in the book, was based on Mrs. Swanson.